Ama Qamata is a South African actress best known for her starring role as Buhle in the Mzansi Magic telenovela Gomora, and Puleng in the Netflix series Blood and Water.

Ama hails from a small town called Cala in the Eastern Cape province, South Africa. Her interest in acting dates back to her days in primary school where she portrayed the role of Snow White in a play. Teachers and her fellow pupils praised her for a great performance.

She did her college education at Reddam House School. She then went on to study Theatre and Performance in the University of Cape Town but was forced to put a pause on her education after she landed a role on the Mzansi Magic soap opera, which resulted in her moving to Johannesburg.

She made her first television appearance in the second episode of SABC1 sitcom, My Perfect Family season four, taking the recurring role of Naledi in October 2016. She also made an appearance on Muvhango, a South African soap opera.

In 2018, she landed the role of Thandi in the ETV soapie, Rhythm City.

In the Mzansi Magic telenovela Gomora, she plays Buhle, a 15-year-old Sandton girl who had to move with her family to Alexandra (Gomora) after her father lost everything.

She was specifically picked for the role by Kutlwano Ditsele, the executive producer of the show. In one interview, the actress said that she relates to her character in the show since they both have the same personality. She also plays Amina in Commandos: The Mission

The actress landed another role in a new Netflix series. Netflix announced in 2019 that the young actress was among the two (2) young leads of the series Blood and Water.

She portrays the role of Puleng who is a young and intelligent but spontaneous 16-year-old girl. She investigates the cold case of her abducted-at-birth older sister. The series premiered in May 2020 on Netflix.

Afro & Negro nose🤎✨ This is my lockdown look until the salons open lol.

Louise, you literally took my vision for this dress and turned it into reality. You are a magician really💚💫 Dress by: @louiseboni_clothingstudio 👗 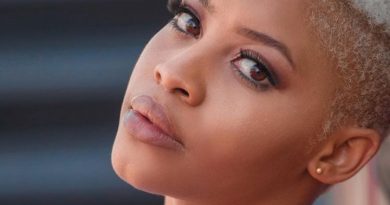